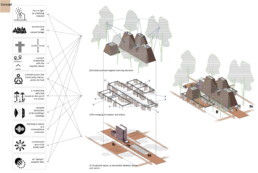 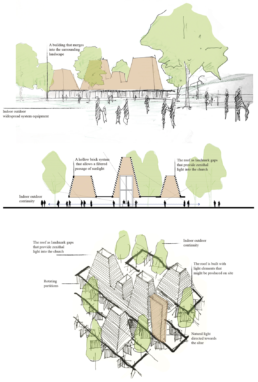 For the religious community the liturgical building is seen as a place of relationships: this is where the population gathers for the celebrations but it is also where the indivi- dual finds God through contemplation and praying alone. The majestic Rwandan nature, as it is itself a place of God, is considered as a fundamental design element, continual- ly dialoguing with the Church. Therefore, it contaminates the building’s indoor space, and at the same time it is contaminated by it: the Church, that stems from a reinter- pretation of the Rwandan archetypical house and from the shapes of the conifers that are all around the site, dissol- ves itself in a controlled and controllable way in order to generate a fluid and permeable space for passage, sighting and listening to the forest. The community seeking God finds itself in the house/forest in which the sounds become fundamental in a context of essentiality, listening to the inner self and to the sound of the whole Creation, considered as the main expression of the divinity on Earth. Functions and rooms are arranged considering the dicho- tomy deriving from the dialectical encounter between the search for the divine’s purest form and the man, who recognizes himself as mortal and sinner: using the canoni- cal Latin cross system, the longitudinal axis is dedicated to the liturgical function, and the transversal one to the chapels for baptism and reconciliation. The Altar is placed at the intersection of the two axes, operating as hinge and focus of the composition.

The evocative power that only light can give is used to assist and emphasize the special experience of commu- nion and inner peace, using it as a real building material

The most interesting areas as the altar, the confessional, the assembly and the baptismal font, are touched by a zenithal light cone, coming from the openings at the top of the cones that form the roof.

A diffuse light system lightens up the entire structure though the “dematerialization” of the building’s envelope and from the lower strip, which can completely open up. In fact, special revolving walls allow total freedom in the spatial configuration, which can virtually expand to infini- ty, to include the entire forest.
All the parts that are physically or virtually massive, like the roof that seems to be suspended and the walls when closed, nevertheless remain permeable to filtering light, thanks to the technologies adopted which guarantee permeability in any case.